Those who experienced Hot Air Balloon in Chandigarh know what it feels like to see Chandigarh from a heigh that too standing in the open air with a massive balloon over your head and the city at a good distance below your feet. All thanks to Adventure Garh, an adventure sports carnival which was organized by the Chandigarh Administration & CITCO (Chandigarh Tourism) for residents of the city beautiful in Sector 34, Chandigarh.

The 5 day event which was organized from 22nd to 26th April saw tremendous response and Hot Air Balloon was one of the major attractions at the carnival. If you have seen hot air balloons in other parts of the world, then you might know that hot air balloons travel from one part to another depending on the air flow. And this might make you think that if the hot air balloon took off from Sector 34 Chandigarh, then where does it land? Here’s everything you might want to know about the hot air balloon ride at Adventure Garh in Chandigarh.

Cost for a ride in Hot Air Balloon was Rs. 500 per person.

The Balloon was tied with thick ropes with the ground and these ropes were managed by people all the time. This was done to prevent the air balloon from flying away and landing at some other place. The fire below the balloon was enough to produce hot air which could lift the balloon.

The maximum height to which the balloon went was 200 metres above the ground level and this was enough to have a splendid view of Sector 34 buildings, residences of Sector 33 and as far as your eyes could see from the top in all 4 directions. As soon as the balloon reached the maximum height, the intensity of the fire burning below the balloon was decreased. After remaining in air for few minutes and flowing with the flow of air, it started to come down. The hot air balloon was being controlled with the thick ropes tied to it from the ground.

The rising and coming down of the balloon happens at a very slow speed. But the excitement that you have in your stomach while coming down and the fear of crash landing is totally worth the ride.

Adventure Garh 2015 has ended on a bright note and we wish that more such events are organized frequently. 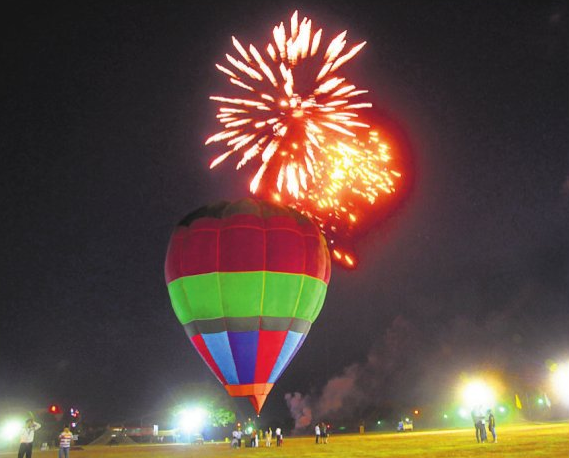