Amritsar, the Golden City of Punjab, is renowned and proclaimed as one of the most loved cities by Indians. With the bliss of religion the city, Amritsar has thrived from just being a city to becoming the home to all Sikh pilgrims. Starting from the historical aura and, moving ahead to the traditional taste, the city is blessed with the Punjabi Tradition and Culture. So, if what you are looking for is to experience the felicity of the Punjabi Culture, Amritsar is the best place for that. Below is the list of the best places to visit in Amritsar.

Places that You can’t Afford to Miss, if in Amritsar

There are many places to visit in amritsar and, among them are The Golden Temple, Jallianwala bagh, Maharaja Ranjit Singh Museum, Wagah Border, Durgiana Temple, ISKCON, Akal Takht and Tarn Taran Sahib.

Best Time To Visit the Golden Temple: November to March

Where at one side, Amritsar is counted among the religious places of India there, it is also landmarked as the place that speaks of history loud and clear. Maintaining the Historical side of the city, Jallianwala bagh is one of the most visited tourist places in city. It is basically a Public Garden that is renowned for one of the worst stories of history in India. This is the place where the Massacre of 1919 took place in which the British Army Soldiers fired opnly on the unarmed gathering of men, women and children on April 13, 1919. The place consist of a Well that came in as a recue for many women, men and children from firing. Also, the walls with the bullet marks and the well is preserves as a memorial significance.

You can also see the light and sound show that is played every evening in Amitabh Bachan’s voice, recreating this horrifying and terrifying incident.

Best Time To Visit the Jallianwala Bagh: Octoober to March to avoid the heat

Best Time To Visit the Maharaja Ranjit Singh Museum: Throughout the year 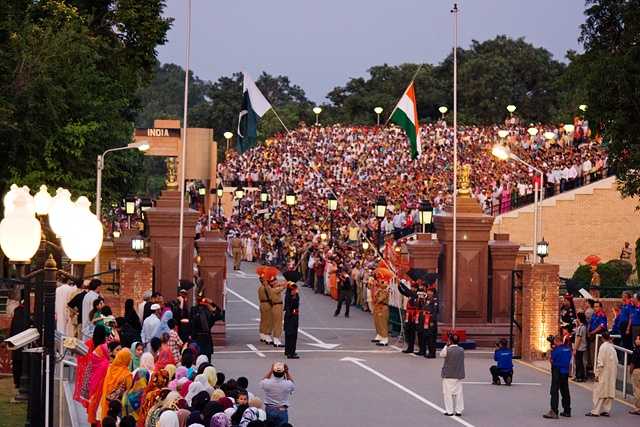 Included among the most prominent religious places in Amritsar, Akal Takht serves as one of the five seats of Sikh religious authority. Akal Takht means “throne of the immortal” is the central altar for the sikh Political Assembly as well. It is known that, Shri Guru Hargobind Singh has laid the foundation stone of this religious building in 1605.

This building is facing the Darshini Deori that leads straight to the Golden Temple. The Akal Takht is the 5 story building that is built with the gold leafed dome.

Location- Inside the premises of Darbar Sahib, Amritsar

When entering the Golden Temple in Amritsar, at the very entrance leading to the Harminder Sahib is situated Darshini Deori. This beautiful marbal pathway is designed during the time of Maharaja Ranjit Singh. With extremely beautiful Deori Door covered with silver sheets on one side with ivory work on other, This place is magnificent and mesmerizing. At one side of Deori is the room that is meant for Akhand Path and Ragis and on the other side, there is a home of Planiquin. This is counted among the top places to visit in Amritsar.

Location- Inside the premises of Darbar Sahib, Amritsar

Built in 16th century and rebuilt in 1921, Durgiani Temple is one of the major tourist attractions in Amritsar. Prominently knwon as the Lakshmi Narayan Temple, Sitla Mandir and Durga Tirath sthan this temple is located in the religious bliss of Amritsar. The most interesting thing to know about this temple is that it’s infrastructure is similar to the Golden Temple of Amritsar.

# The Old City Bazaar of Amritsar

The Old City Bazaar of Amritsar is the gold mine of ethnic Punjabi Jootis. Renowned for its ethnicity, this Bazaar has all the ethnic and traditional stuff that would attract the Tourists towards it. This is the fascinating place to wander around to experience the Punjabi Culture. Shopping at the Old City Bazar is one of the best things to do in Amritsar.

Tarn Taran is the Gurudwara that was built by Guru Arjan Dev ji, The 5th Sikh Guru is one of the major tourist and pilgrim attractions in Amritsar. Along with the historical importance, this place is renowned for its relegious point of view. This is the home to Darbar Sahib Sri Guru Arjan Dev ji and Gurudwara Guru ka Khuh. This is also renowned for having the largest holy water tank in the world.

Chand Baori is one of the major tourist attractions in Amritsar that is renowned for being the deepest and largest step wells in India. Constructed in 800 A.D, this well is designed with 3500 marrow steps that take you 13 stories down. With the depth of 30 meters, this place gives you a spectacular view. This is one of the Spectacular tourist places in Amritsar.

If you are a fan of old architecture, Khalsa college will definitely please you with its 300 acre of campus infrastructure. Built in 1892, this college holds historical and architectural value to Amritsar. This place’s architecture is considered as the best standing example of Indo-Sarcenic architectures. This is one of the best places to enjoy the mesmerizing architectural establishments of India. So, if you are in Amritsar, make yourself in acquaintance with the beautiful college. With its architecture significance, this place has become one of the prominent tourist attractions in Amritsar.

Next up in list is the Khair Ud Din Masjid, that is known for its role in the India’s Freedom Struggle. This is one of the famous tourist attraction in Amritsar. This is the mosque that Shah Attaullah Bukhari [tootie-e-Hind], called upon the Indians to raise their voice against the British rulers. Along with the historical importance, this place is also one of the most beautiful mosques in India.

Counted among several Caravan Serais, Serai Aamanat Khan is one of the Mughalian empire Caravans. This Serai was built to reduce the travel distance between Lahore and Agra and now has become one of the best tourist places in Amritsar. This place was also the dwelling and resting place of the great Calligrapher Aamanat Khan who is famous for his Calligraphy on Taj Mahal. This place is one of the major places to see in Amritsar that is renowned for its architecture and historical importance.

The Hall Bazar is one of the major shopping areas in Amritsar. Embedded with multiple number of shops and restaurants, this place has a wide range of commodities to offer. The place is a hub of shops offering exclusive range of traditional clothes, handicrafts, electronic and much more. Shopping at Hall Bazar is one of the best things to do in Amritsar.

There is no better place than Dhabas to enjoy the authentic Punjabi food. With the remarkable reputation of maintaining the autheticity of the food, Bharawan Da Dhaba is one of the best place to grab a meal in typical Punjabi style. Find more authentic places to eat in Amritsar with our list of best Dhabas in Amritsar.

Located near the famous Golden Temple, Iskcon temple is the Sri Sri Radha Gokulananda Temple that is counted among the most famous places to see in Amritsar. Established and built by the famous international society for Krishna consciousness, Iskcon is a prominent Hindu religious place. Here, you can see some beautiful Statues of Radha and Lord Krishna. This place is counted among the best places to visit in Amritsar.

If you are in Amritsar, Visiting Sada Pind is must to do thing. The place Sada Pind is designed to speak of Punjabi Culture. The Place is a magnificent portray of the old and traditional Punjabi Pind ( Village). Spreaded across 12 acres, Sadda Pind is one of the prominent tourist places in Amritsar. It is the living implication of traditional village.

Renowned as the Hall Gate, the Gandhi gate in Amritsar is basically the door to the shopping hub of Amritsar. With the impressive architecture, this gate is a Classic Rajmahal gate with a Clock with the glowing sign written as ” Amritsar- Sifiti Da Ghar”.

If in Amritsar, you should pay a visit to the Harike Bird Sactuary that provides exclusive Duck tours along with water bus travel experience.

Gobindgarh Fort is one of the famous destinations in Amritsar. This is the hub to full entertainment as it provides you the experience of history, religion and culture at one place. Home to many shows and exhibitions, this Fort was designed in 18th century and is known for its architectural beauty.

Situated in Amritsar Cantonment area, Central Sikh Museum is a perfect tourist and travel destination in city to get familiar with the Sikh history and culture through the immensely and perfectly designed and collected Potraiture, manuscripts and Ancient Armory.

Last but, not the least is this Company Bagh of Amritsar. This is a beautiful picnic spot for localites and is famous for its lush green surroundings.

These are the top 5 places to visit in Amritsar. Amritsar is the hub of tourists throughout the year and is one of the prominent religious gem in India for Sikhism. Counted among the best Pilgrims for Sikhs, this places is also renowned for its historical significance. The land of Amritsar is blessed with many Sikh Gurus residing there and is a landmark depicting many incidents of History.