Audi A3 has just got a new facelift model for 2017 in India and it is becoming the most talked about topic in the country. Driving Indians crazy over its new muscular built, lavish interiors, luxurious look and what not! Welcome 2017 with the new Audi A3 deriving inspiration from big daddy Audi A4. Catering to classes and not masses since their launch worldwide, Audi A3 launched in 2017 in India is taking the entire automobile sector in its stride for it has specifications class-apart!

Launching two grades of Audi A3 today in both petrol and diesel variants, mainly Premium Plus and Technology, price range starts from 30.5 lacs to 35.8 lacs. Initial buzz of the price range starting from 25 lacs has been increased by an approximate 33% owing to amazing features they have incorporated in the new Audi A3 facelift.

The petrol variant claims to give 19.20 kmpl on the A3 which is quite high as per Indian Standards. Think about what Diesel variant has to offer. Go for a test drive and figure that out.

Comparison of Diesel and Petrol Variants (Audi A3 2017)

Incorporation of features mentioned below if doesn’t make you “give them your money for that car”, then do not call yourself a car lover. Though petrol variant in 2017 in Audi A3 is much powerful than previous ones. Following are the specifications with which Audi A3 is going to shake you off from your complacency. 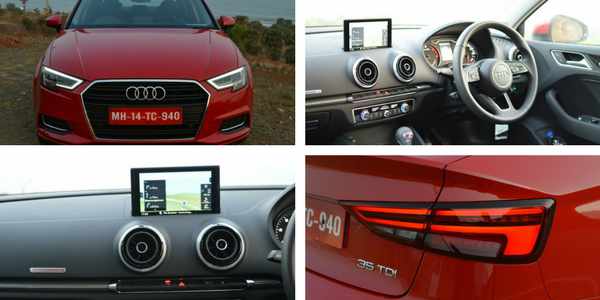 The upgradation of the contemporary look is the key factor to this latest and young member of the Audi family, Audi A3 2017. Find the description of the interiors as below :

The review is based on the launch of the same car in Germany a few months ago. The critical eye review of the Audi Facelift 2017 in India includes:

Unlike the launch of variants and models in the European and German markets a step-motherly treatment has been encountered in the India in the launch of Audi A3 Facelift in 2017. Indian facelift suffers major missings put up as follows:

Though a lot of comparisons are being made in its counterpart Audi A3 but the facelift version was definitely highly awaited in the Indian Market. For the car lovers who simply buy cars every 6 months as their passion, this one is highly recommended. A must drive, I am ready to go, Are you???