The famous laughter queen Bharti Singh who is all set to get married to her long time beau Harsh Limbachiyaa on 3rd December’ 2017, recently took her official Instagram account to showcase her wedding card to the world and we are bowled over by the level of cuteness of the Wedding Card.

The comedian who chose the beauty of sunsets on the beaches of Goa as her wedding destination has taken things under her control and is preparing for her wedding according to her dreams and desires. The wedding card of Bharti Singh and Harsh Limbachiyaa’s wedding is adorable and has been designed by Puneet Gupta Invitations.

Wedding Card is the foremost thing when it comes to marriage. Bharti Singh and Harsh Limbachiyaa who have begun with their wedding countdown have a beautiful wedding card which has been designed by Puneet Gupta Invitations. Apart from the card being as cute as the couple is, it also portrays the beach theme of the wedding to be held on 3rd December’ 2017. The aqua blue color of Bharti Singh’s wedding card is a perfect acquaintance to the beach theme of her wedding. The front of the card witnesses Bharti Singh and her would be husband Harsh Limbachiyaa’s name written over a frame which has been designed with seashells. 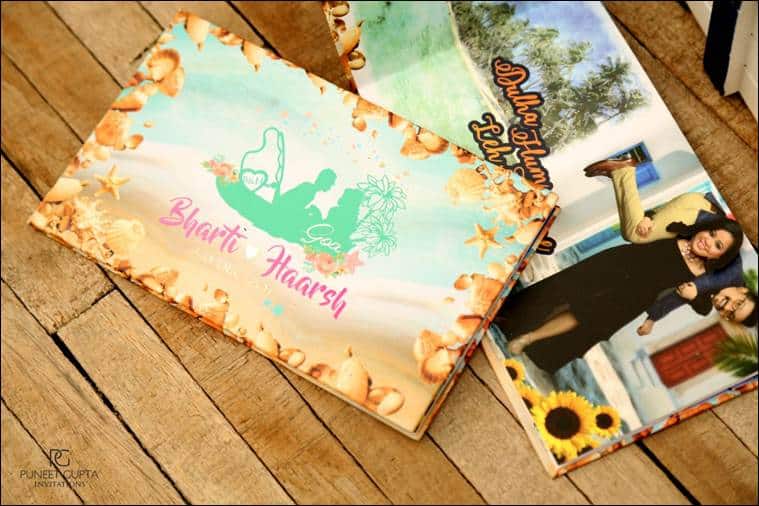 Moving forward, when one opens the card, he will come across Bharti and Harsh’s pop up picture placed along with the details of the wedding to be held on the beaches of Goa. Another interesting picture of the couple where Bharti can be seen carrying Harsh on her shoulder forms a part of the card. All of this is packed in a white box made up of wood which contains deep blue colored laces as well as real sea shells.

Bharti and Harsh had always kept their relationship a secret. They formally announced their relationship after going through a ‘Roka’ ceremony earlier this year. The couple will be tying the knot in Goa but have a few planned up functions like ‘Mata Ki Chownki’ at their respective residences in Mumbai. Bharti who belongs to a Punjabi family also will be having a Bangle ceremony before she heeds to Goa to step into wedding matrimony.