CBSE has released the date sheet of Compartment Examination of Class 12th board exams of 2017 on its official website. Students of Class 12th under CBSE board who had to appear for the Compartment Examination in 2017 by CBSE can check the notification online. With so much of delay this year that CBSE made in declaring the result of Class 12th board exams and the chaos that took the nation by storm with its moderation policy decisions, CBSE has gone pretty stringent with its norms as related to releasing dates sheets, results, notifications etc. online.

Also called as the ‘Senior School Compartmental Examination’ of 2017 conducted by the ‘Central Board of Secondary Education’ i.e. CBSE as a move to allow candidates who could not make it to acquire the pass marks in the Class 12th CBSE Board examinations of 2017 this year, the board has released an official notification online. The notification as released by CBSE deals with declaration of Exam Date, Day, Duration, Schedule and Important Instructions pertaining to CBSE Class 12th Compartment Examination which acts as an ‘Improvement Exam’ for providing students of Class 12th CBSE Board Class to have another opportunity to improve their score.

The official notification as released by CBSE deals with following key points. Take a look : 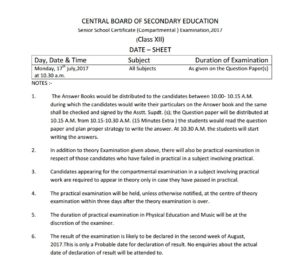 All the candidates who are preparing hard to appear for the CBSE Compartment Examination of Class 12th on July 17,2017, we wish them all the very for the same this year.

Get Ready for UPSC With These Simple Strategies

08/10/2021
Check Out
More :)
Interesting Stuff For You
Find Teen Patti cash casinos on TeenPattiBaba.in.
Back to top button
Close