Details of 108 Ambulance Service in Chandigarh

In case of emergency, anyone can simply dial 108 from landline or mobile phone. The call will be answered by a special section of Chandigarh Police Control Room which will disperse a 108 Ambulance to your location.

Chandigarh has got a total of 6 ambulance vehicles under 108 project. These ambulances will be stationed at 6 different points in Chandigarh so as to cover the entire city in minimum possible time.

108 ambulance can only be used for Government hospitals in Chandigarh which include – PGI, GMCH Sector 32, GMSH Sector 16, Civil Hospital Sector 22 and Civil Hospital Manimajra. There would be no charges and this ambulance service is absolutely free of cost.

Difference between 102 and 108 Ambulance 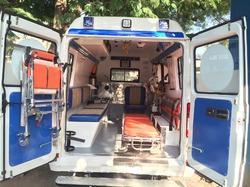 Earlier, 102 was the only government ambulance service in Chandigarh which was used to transfer a patient to the hospital in case of emergency. 108 Ambulance is more advanced than the 102 one as it is well equipped with all basic life supporting and patient transfer equipment such as scoop stretchers, folding stretchers, first aid kits, oxygen cylinder etc.

Apart from this newly launched 108 Ambulance Service, Chandigarh will also have 102 ambulance. Both services are available 24 hours a day and all 7 days a week.

The team here at Chandigarh Metro prays for your good health and wishes that you may never have to use such emergency services for any of your family or friends. But if need be, 102 and 108 ambulance will be there to help you out.