No Chandigarh tableau will be displayed in the Republic day parade for year 2017. Chandigarh has failed to make it to the final rally at Rajpath in New Delhi where States and their different flavors are displayed not just to the nation but to the entire world. Reason being the incapability of the administration in finalizing the theme for the occasion. Even two years back, Delhi authorities rejected the ideas presented by Chandigarh, and this time it has failed to even send the entries. This was published in The Indian Express.

According to the national norms, every state who is willing to participate in the parade has to send the entries first to Ministry of Defence (MoD) which finally chooses the best 25 themes are selected to be displayed to the entire world. These entries contains the proposed theme for display which generally contains an altar of specialities regarding the place, diversified culture or ethnicity of people, military might or anything related and famous to the position of that place in India as a nation. Based on these points these themes are judged and then made ready for the final display which the UT administration of Chandigarh failed to conceptualise.

Ideas for this time were:

Who Decides the Theme:

From last two years, Chandigarh department of tourism is responsible for designing, conceptualizing and all the artistic touches to the theme to be displayed, like last year tourism department gave this responsibility to Bheem Sain Malhotra, assistant teacher in Chandigarh College of Architecture (CCA), where he and his team of students developed the whole idea and its presentation which was selected but this time, Chandigarh administration didn’t look for an expert’s opinion on the matter and so the results of failed efforts are visible.

According to sources, two meetings were held headed by director of tourism department, UT to decide on the theme in which discussion thought finalizing two ideas of the solar city and the smart city came forward but were not presented forward as the director showed the inability to decide for the theme properly giving the reason that Chandigarh is a small city and hence the options are very limited. Chandigarh already presented the theme of rock garden twice for which it got selected, out of four times for which Chandigarh has participated in the rally by holding a place for its tableau. Also reasons were given that the idea of the development of Chandigarh as a solar hub will also be represented by the Ministry of New and Renewable Energy (MNRE), it didn’t go forward with that idea as the main focus. 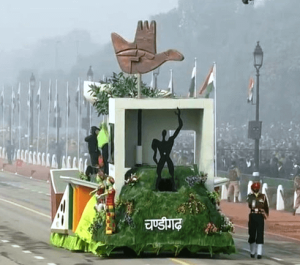 In 2014, Chandigarh was successful in displaying its own tableau, which was centered around Nek Chand’s Rock garden, which is the most famous attraction of the city. Undoubtedly especially for tourism, this year Chandigarh was successful to participate in the Republic day celebrations after 13 long years. In the meanwhile, Chandigarh being unable to impress the national team, didn’t find a place. Again, in 2015, two ideas were put forward, which were Works of wonderful Architect Le Corbusier and depicting the rose festival which is the Asia’s biggest festival of its kind rose show. Both of theses ideas were rejected. In 2016, Chandigarh chose to depict the greenery and architecture of Chandigarh, depicting its park and justifying its name as ‘The City Beautiful’ which finally was selected, this year, architects of buildings such as The Secretariat, The High Court building and such places were shown and highlighted immensely. Again this year, it failed to even send an idea forward.

Well, analyzing this track, we can hope for seeing a tableau of Chandigarh with pride in 2018. Chandigarh hopes to be finally more alert now to get its way clear for the New Delhi Republic Day Parade.