Going hi-tech and leaving behind the old PCR Gypsies, Chandigarh Police has added 13 Maruti Suzuki Ertiga cars as new PCR vehicles to its fleet. These new PCR cars were flagged off by Chandigarh UT advisor, Vijay Kumar Dev at Police Lines in Sector 26, here today. It would be a delight to watch these new police cars patrol Chandigarh roads.

Maruti Suzuki Ertiga cars which have been introduced as Chandigarh Police PCR vehicles are fully loaded with all top functionality including GPS, power steering, power windows and AC. These new PCR cars will give Chandigarh Police cops a comfortable ride during patrolling in the city. All new cars introduced in Chandigarh PCR fleet are diesel cars. Wireless sets have been installed in the vehicles and first aid boxes have also been provided. 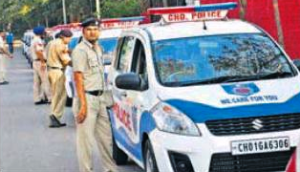 As compared to old gypsies, Maruti Ertiga cars have a power steering and other excellent features which would help Chandigarh Police cops to swirl faster in the city. This means that the response time of Chandigarh Police will be much quicker with these new cars and regular patrolling will be more comfortable. Earlier, many cops had installed fans in their PRC gypsies to beat the heat but now these AC cars are sure to give them comfort during their on-road duty hours.

Moreover, the new PCR cars moving on Chandigarh roads will be a delight to watch. Just imagine police cars in New York, San Francisco, Paris or in any other top city of the world. If you haven’t seen these Police cars in real then just imagine some Hollywood or Bollywood movie which had police cars. Ah, so this would be the sight in Chandigarh. Maruti Ertiga cars roaming in the city with red and blue police lights on top. Whatever the scene may be, Chandigarh Police had progressed from gypsies to Ertiga cars as PCR vehicles and you should be happy.

PCR Vehicles in other states of India:

If you are thinking that Chandigarh is the only city in India to replace PCR gypsies with new cars, then you are wrong. Delhi Police recently introduced Toyota Innova cars into its PCR fleet and even Punjab Police has few Mahindra Scorpio cars in its fleet. Chandigarh Police has however selected Maruti Suzuki cars as Maruti Sukuzi as a company is known to manufacture cars which are known for low maintenance cost and high mileage.