There’s no doubt in the fact that Chandigarh is one of the most well planned cities of the world. Going a step further and bringing Chandigarh at par with international standards, Chandigarh Administration has introduced lane system in sectors. Along with division of sectors as A, B, C, D and specific house numbers; Chandigarh will now have lanes as 1, 2, 3 in each sector. Chandigarh administration has already implemented and launched the pilot project for lane system in Sector 35. This system would soon be rolled out in entire Chandigarh sector wise, one by one.

As sectors are divided into 4 parts namely A, B, C and D, the planning committee has decided to introduce around 10 lanes. However, the number of lanes may vary for each sector and each part depending on the size of the sector and number of residences in each part. Chandigarh administration has decided to number the lanes in a clockwise direction staring from numeric number 1. 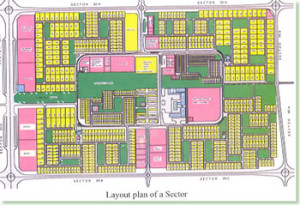 Your new house address will thus be something like:

This will make it easy for anyone to find a given address especially if someone from outside Chandigarh is visiting the city. A person has to reach Sector 35, go to division B, find lane number 4 and hence easily locate the house number without roaming in lanes to find a number.

The project of introducing lanes will soon be implemented in other sectors of Chandigarh.

Chandigarh, the city beautiful has always been on the forefront of introducing technology and providing better facilities for its residents. Other cities might copy the model but as of now it is Chandigarh which has such a vast address system constituting house number, lane number, sector division, sector number and then even North, South, East and West Chandigarh.