Chowks of Chandigarh are the best feature any city can replicate. Chandigarh as a great and able planned product of French Architect Le Corbusier enjoys a great state of monopoly for its roundabout aka chowks. The well planned and designed grid road network of Chandigarh proudly boasts of a series of chownks that not only aesthetically improvises the entire Chandigarh city but also lets the smooth flow of traffic in its kitty!

These carefully designed and installed chowks in Chandigarh are listed as below:

The physical significance of this chowk in Chandigarh marks the close proximity of the office building of the renowned newspaper The Tribune to this roundabout. The dark flashing lights along with a digital news board constantly depicting news headlines keeps Chandigarhians updated with the latest while they stand at the lights waiting for a green signal.

The lights at the aroma in sector 22, Chandigarh might not fall under the category of Chowks in the city but definitely gets its name owing to the vicinity areas of Aroma Hotel and Foodcourt which is one of the oldest ranging back to the year 1953 belonging to Chandigarh City. These lights mark the great night life of the city for those night owls who would love to eat and chill at wee hours of solace.

Matka chowk, they call it, for, it has a huge “matka”-like structure made of fibreglass at the centre. This chowk in Chandigarh is situated on the prestigious Jan Marg and has been designed and maintained by the Chandigarh Housing Board. Famous for the seasonal perennials in full bloom to give the visitors to the city a soothing and pleasing sight this chowk in Chandigarh witnesses, all major rallies and demonstrations. 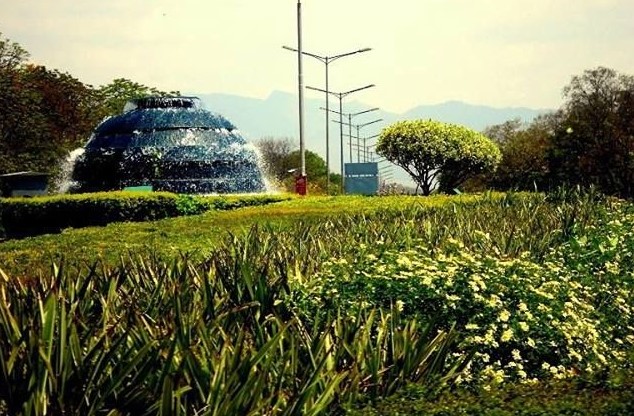 Ever heard of a chowk in a city generating employment for its people? Situated at the junction point of Sector 20 and sector 34, Chandigarh is the labour chowk. It boasts of a paradoxical identity of demarcating the city of riches from poor jobless souls. This chowk of Chandigarh witnesses around hundred daily wagers, including painters, carpenters and masons in the morning. Some get work while others wait for the rest of the day to earn living for their family.

Formerly known as Piccadily chowk owing to its nearness to one of the oldest theatres in the Chandigarh city, this chowk has been existent and famous for the fact that enjoying more than just a  chowk status in Chandigarh. It is a full-fledged self-proclaimed stop for daily floating commuters from small nearby towns of Haryana and Punjab. This chowk in Chandigarh now is known as the Marriot Chowk in the city after Piccadilly theatre got demolished and we have a 5-star Hotel J.W. Marriot.

The transport area near to this chowk fetches its name as Transport Chowk which is one of the biggest chowks in Chandigarh. One can walk upto the area in case one needs to hire a commercial vehicle for transportation purposes. Another interesting fact about this chowk is that unlike conventional chowks, it is a light point though called as a chowk!

This city of beautiful gardens, therefore, has chowks worth talking about. Hats off to the marvellous creation which signifies the glory of Chandigarh.

Did we miss out some chowk in Chandiagrh? Do let us know through comments below.

Got some unique idea and want to see it published?

Send us your idea at hello@chandigarhmetro.com

7 Posh Sectors of Chandigarh That Are Admired By Everyone