The long wait for CNG (Compressed Natural Gas) in Chandigarh is finally over as 6 CNG pumps (filling stations) have been announced in different areas of Chandigarh & Mohali.

CNG was introduced in New Delhi long time back and laws were made to run all public transport vehicles including buses, autos and even local taxis on CNG as it causes lesser pollution when compared to diesel or petrol. However, nothing of this sort has been proposed for Chandigarh right in the beginning, but these new CNG pumps in Chandigarh will surely boost the sales of CNG run vehicles in the city and will also help Delhi people owning CNG vehicles to come to Chandigarh / Mohali without worrying about the availability of CNG.

CNG in Chandigarh has been provided by Indian Oil Corporation in joint association with Adani Gas and the work on pipeline has almost been completed. The new company – Indian Oil Adani Gas Pvt. Ltd. is expected to initiate 4 CNG pumps (gas filling stations) in Chandigarh and 2 in Mohali from 31st March 2016. 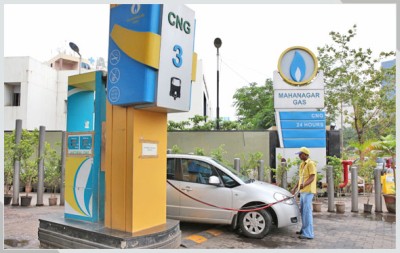 CNG in Chandigarh would be available at 4 pumps. These will be called CNG filling Stations. The 4 pumps which have been announced are in:

It is expected that apart from these 4 initial CNG stations, Chandigarh would soon get more CNG pumps in near future.

Update: These pumps have not been started yet. There are operational delays & CNG is still not available in Chandigarh (As of May 2016).

Apart from Chandigarh, 2 CNG filling stations have also been announced for Mohali / SAS Nagar. These pumps include:

As of now, there is no sale of CNG cars in Chandigarh. But with these new CNG filling stations in Chandigarh, car dealers will surely push CNG vehicle sales in Chandigarh as well as Mohali. Apart from manufacturer pre-installed CNG kits, car owners can also get CNG kit installed in their vehicles from authorized stations. This segment will also see a boom in Chandigarh as people might opt for CNG run variants.

The availability of CNG (Compressed Natural Gas) in Chandigarh is a huge step towards a less polluted Chandigarh and the city might go Delhi way, by making its public transport vehicles shift to CNG in near future.