President of France, Francois Hollande was in Chandigarh on his maiden visit to this beautiful city in North India. Hollande had expressed his desire to see Chandigarh as it had been designed by a French Architect Le Corbusier and had recently been named as one of the Perfect City of the World. Narendra Modi, the Prime Minister of India accompanied Hollande for his Chandigarh tour and went to see the main tourist attractions of Chandigarh.

The French AirForce One Plane (Cotam Unite) carrying the President of France landed at Chandigarh Airport at 1:00 Pm. Hollande was greeted by Governor Captain Solanki, Advisor Vijay Kumar Dev, MP Kirron Kher among others at the airport. He was taken to Hotel Taj in a Black BMW for a short stay before starting his city tour of Chandigarh. 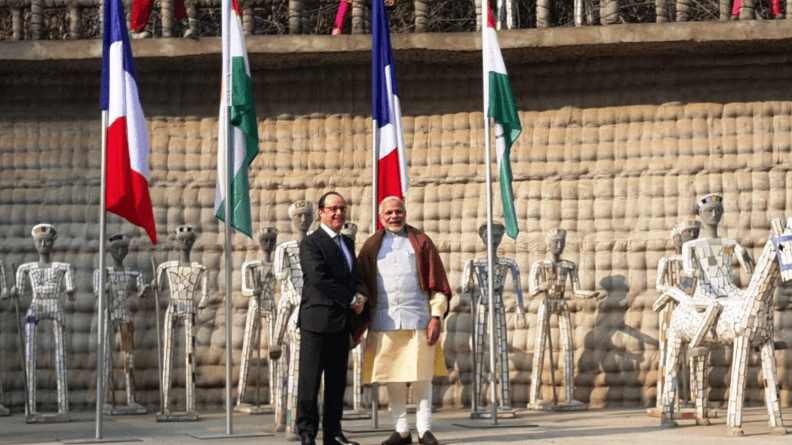 After spending few minutes at Hotel Taj, Francois Hollande went to Rock Garden. Narendra Modi was already waiting for the French President at Rock Garden. Both the leaders took a short round of the world famous Rock Garden of Chandigarh. Media persons from India as well as from France accompanied both the leaders as they went around watching Nek Chand’s creations. 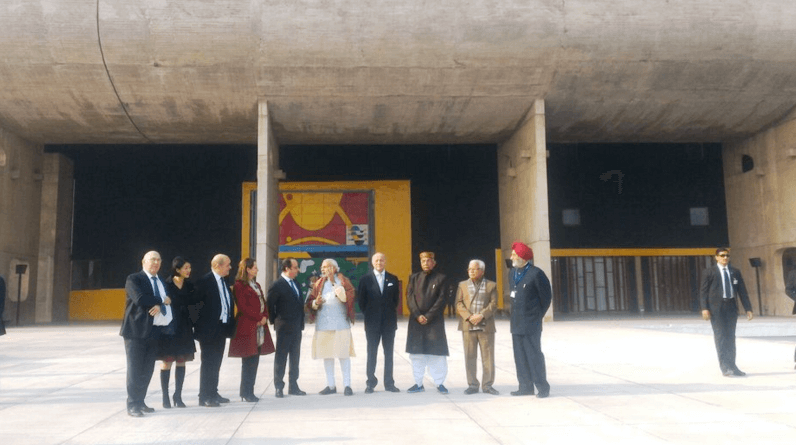 After visiting Rock Garden, the VVIP cavalcade headed to see the Chandigarh Capitol Complex in Sector 1. Both the leaders talked about the architectural marvels built by Le Corbusier and even posed for photographs. The Punjab and Haryana High Court and Legislative Assembly Building were among those visited by Hollande and Modi. After the visit France President Hollande said that “I wish that the work of Le Corbusier, that can be admired in Chandigarh, be recognised by UNESCO”. 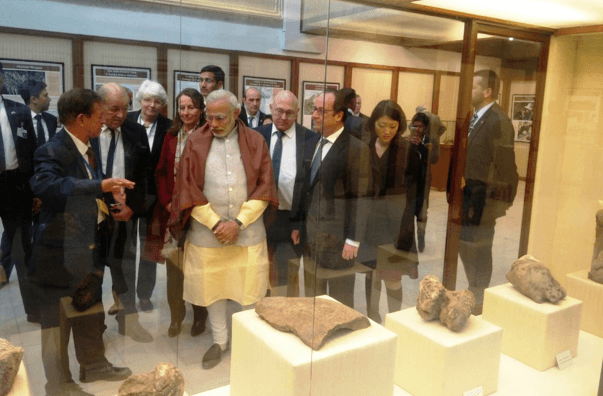 After the Capitol Complex, Holande and Modi moved on to see the Government Arts Museum in Sector 10. It was here that both leaders saw archaeological findings from the foothills of Himalayas.

Folk dances were presented by different teams of Bhangra artists at all the 3 locations in order to show the rich culture of Punjab and Haryana. All men and women were dressed in Punjabi Bhangra attire which made Hollande & Modi get themselves clicked with them.

Later in the evening, both leader signed 16 different MOUs during the India – France Business Summit which was organized at Hotel Taj in Sector 17.

Also Read: Hollande said that Chandigarh is a very beautiful city and he was glad to be here.