Shimla is going to get transformed as Tata Electric Buses soon shall take over all the routes of hill station as per what recent news states. Tata Motors in competition with rival manufacturing firm Ashok Leyland has introduced electric buses in their business in the modern times which call for eco-friendly and green features everywhere.

The electric buses in Shimla city would ply on the route after Manali-Rohtang pass route gives an affirmative nod to the same concept in recent past.

Tata Motors recently had a commercial test drive this weekend in the Shimla City of its first batch of electric buses. The successful test drive under the branding of Marcopolo piloting the first electric bus under the banner was carried out on the Parwanu-Kalka highway with the round- trip amounting to a distance of 160 km without any charging en-route. After the success of the first pilot project, the second stage of a commercial pilot is highly awaited and is the talk of the town now. The success part can be corroborated from the fact that Himachal state utility phenomenally increased the order of buses by a whopping 200% i.e. from 25 bus order to now 75, which is indeed astonishing. 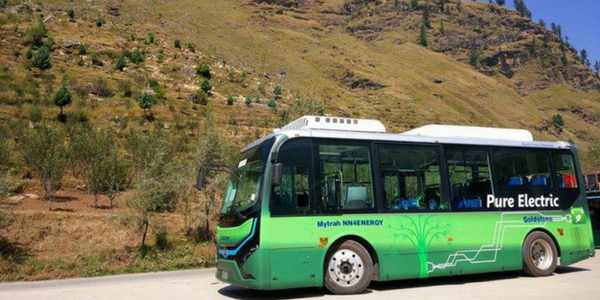 Key features of the Project

The project of introducing Tata Electric buses in Shimla city has drawn attention from the entire nation owing to the key features that state:

Tata vs Leyland – The tough battle in the region

TATA’s , India’s largerst bus manufacturers are leaving no stone un-turned to carve a niche for themselves as they see a huge market potential for the same in India in near future. Last October, Leyland launched its lot of e-buses to ply on Manali-Rohtang pass by the name of ‘Circuit Series’, Tata’s have also now come up with the same concept with an indigenous design.

Giving a stiff competition to the rival contemporary Ashok Leyland who has costing of the same buses in near figures to that of Tata’s, the future of commercial vehicles seems bright for India. The manufacturing of the same is scheduled for its plant in Dharwad for chassis while the bus body manufacturing shall take place in Goa facility of Automobile Corporation.

Joint efforts with Goan Government, Himachal Road Transport Corporation and the state transport department, Tata’s collaboration with these big shots speaks volumes about the project. Awaiting the government’s nod in affirmation to start with the manufacturing process, Soon you would visit Shimla in these classy eco-friendly electric buses replacing the conventional ones while fuel stations to be replaced by Charging stations.

Fascinating sight even at the thought of it, Isn’t it?

Shimla to Get Automated Water Meter Reading Systems in City