You might have heard the news about Chenani Nashri Tunnel on Jammu-Srinagar highway that has been thrown open to public on 2nd April 2017 by Indian Prime Minister Mr. Narendra Modi. It is the longest and the safest tunnel of India and also holds some records for being the best tunnel in Asia. Chenani Nashri Tunnel took over 6 years to be completed and it has reduced the distance between Jammu and Srinagar by a considerable amount.

Before talking about some cool facts about Chenani Nashri Tunnel, let’s understand some features and a bit about its history. This tunnel in India is at an altitude of 1,200 metres. It is an all-weather tunnel and it is claimed that there would be not even a single drop of water inside the tunnel. To make it waterproof, a special membrane has been added to the concrete walls of this tunnel on Jammu-Srinagar highway.

This tunnel is a part of the 286 km long Jammu- Srinagar highway 4-laning work.

This amazing tunnel on Jammu-Srinagar highway is the longest tunnel of India and hence has some cool features in terms of security. Here are 11 top facts.

Transverse Ventilation = It is world’s sixth road tunnel that has a transverse ventilation system. The entire length of the tunnel on Jammu-Srinagar highway has air inlets at every 8 meters and air exits at every 100 meters.

Travel Time = The Chenani Nashri tunnel has reduced the travel time between Jammu and Srinagar by almost 2 hours.

Project Cost = The total cost of the project has been pegged at Rs. 3720 Crores.

Mobile & Internet = Once you enter the tunnel, mobile signals and internet connectivity will not be a problem. BSNL, Idea and Airtel have set up infrastructure inside the tunnel to provide connectivity.

CCTV Cameras = A total of 124 high definition CCTV cameras have been installed throughout the tunnel.

SOS Boxes = This tunnel on Jammu-Srinagar highway has SOS boxes at every 150 meters. These will provide help to people in difficult times.

FM Radio = A special FM frequency has been announced. Commuters will be able to listen to songs on this frequency inside the tunnel and it will also be used to make voice announcements in case of tragedy.

Software = Everything inside the tunnel is managed by a special software. A dedicated Integrated Tunnel Control Room (ITCR) has been set up which would operate 24 hours.

Special Cameras = There are special cameras that will count the number of vehicles passing through the tunnel. If any car stops, the control room will be alerted and help will be provided instantly.

Escape Tunnels = This Chenani Nashri tunnel also has escape tunnels that connect the main tunnel from outside. These will only be used in cases of tragedy to evacuate people. 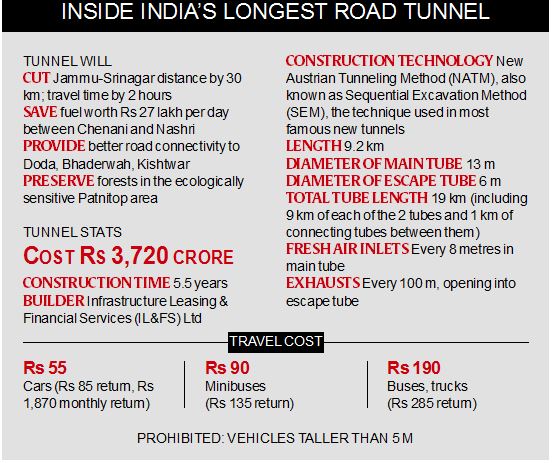