Justin Bieber’s Mumbai show was a magnanimous event, which is still much talked about in the media even after it is over. The 23- years old Canadian singer had first time flown down to India and the organizers had left no stone unturned to make Justin Bieber’s ‘Purpose Tour to India’ a most cherishable one.

The show of Justin Bieber was successfully held at Mumbai’s DY Patil Stadium on May 10. On the night of the event, the entire stadium was jam packed by the Beliebers (as the fans of Justin Bieber are called). Even the Bollywood stars like Alia Bhatt, Malaika Arora, Jacqueline Fernandez, Bipasha Basu along with her actor husband Karan Singh Grover, Remo D’souza couldn’t give the event a miss. The actor parents of the Bollywood including Raveena Tandon, Sonali Bendre, Sridevi with Boney Kapoor, Arjun Rampal, and Arbaaz Khan were also present at the show as they were on the mommy-daddy duties to accompany their wards who are also the Bieber fans.

But that is only about the star-studded event, which was captured by the paparazzi and has gone viral on the internet. In fact, it will be all the more interesting to know how much the Justin Bieber’s rides from the airport to his hotel have cost and what kind of luxurious hospitality he must have received after landing here in India.

The pop singer who was once the teenage icon worldwide reached India on the eve of May 8. He was received by the Salman Khan’s personal bodyguard Shera who had escorted him right from the airport to his hotel. Shera was given away the responsibility of Justin Bieber’s security here in India. Paparazzi who were waiting to capture Bieber while coming out of the airport could just manage to get a few of his glimpse via their lenses, as the singer came is a hush – hush and directly hopped in a white colored Mercedez- Benz G- class, which is also known as the G-Wagen. He was wearing a pink hoodie and was accompanied by his team mates. 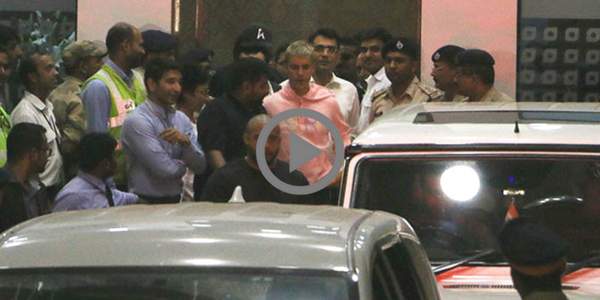 Well, the expenses of Justin’s car ride that we are talking about here is equivalent to the cost of a 2BHK flat in Navi Mumbai….Yes, you heard it right! The ex- showroom price of the car that ferried the Canadian singer was of Rs 2.08 crore. And now the experts are speculating, that the price of the car may rise up after the pop star ridden in it. Apart from this, his friends and other crew members rode in separate cars which were again of cost over Rs 1 crore.

The singer, Justin Bieber who enjoys luxury, had given a long list of unusual demands before he had arrived in India. Here goes the list of demands-

We hope that the Canadian Pop singer, Justin Bieber was content by the hospitality that India gave him and would surely return to our land for yet another rocking concert. We rendered all love from out heart and believe in the fact, Atithi Devo Bhav.