This 23 year old engineer could have managed a decent job for himself, but instead he thought of generating employment for others. An entrepreneur himself now, he wants to produce more entrepreneurs by bringing about a change in the education system of the country.

Akshay Ahuja who had come up with a robotics training startup last year, wants slum children to also get an experience of startup culture. A unique initiative by this young entrepreneur was launched here in collaboration with Chandigarh Metro here today.

A workshop was organised here today for these children to mark the occasion. Under the initiative around 70 slum children from the tricity will be imparted training in a startup culture at the newly opened INNOV8, a co-working space here in Industrial Area Phase I.

Slum children will be trained on a fortnightly basis at the coworking space, which has a number of startups working from its premises now. The participating children were brought in a radio cab to give the feel of an entrepreneur and were even trained how to use the mobile application to promote digital India. They were on the inaugural day explained basics of robotics. They were also given away certificates to acknowledge their participation in the workshop.

Trained by the Chandigarh based RoboChamps, Tushar Sarin, a Class Eight student of a city school here, who now aspires to teach in slums, would be a part of the training module, which is supported by the staff of RoboChamps under the mentorship of Akshay Ahuja, Founder of RoboChamps.

RoboChamps is a sister concern of Robotics Education World being run by Akshay Ahuja and is engaged in providing Robotics and Technology based education to the young minds through schooling education in India.

Poshtic, another Chandigarh based startup in foodtech was the food partner for the event. 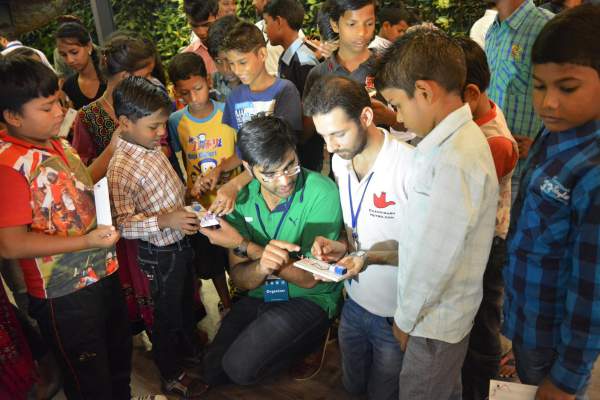 Vivek Atray, I.A.S, Author and Mentor, while speaking on the occasion said, “It is highly important for society at large to encourage children from underprivileged backgrounds to shine and realize their potential.”

Akshay Ahuja, Director, Robotics Education World, said, “While most of the well to do families can afford to get the best education for their children, this unique initiative is sure to bring a smile on the faces of slum children of tricity. I have always felt education is for everyone irrespective of the social status and being a startup myself, I felt these underprivileged kids who are otherwise deprived of quality education must be trained. Who knows some of them turns out to be an entrepreneur one day like me.”

He added, “We don’t want this knowledge to remain with private schools and government schools, and want to introduce this concept in slums also. We did one pilot project on one of kids Aakash from Sector 79 slums and today he is capable to earn his livelihood. In this campaign we will promote Skill India, Initiated by our Prime Minister, Narendra Modi.”

Ajay Deep, Founder, Chandigarh Metro, said that “The city beautiful is lucky to have such startups that are taking the initiative to train slum children of Chandigarh. Young children need such hands on practice workshops to boost their morale and we wish RoboChamps success in their mission to revolutionize the Indian education system”.