Your next visit to Sector 17 Plaza will give you a new experience as Chandigarh Administration has initiated a major anti encroachment drive to give a new, elegant and uniform look to the main market area of Sector 17 Chandigarh.

The main purpose of this one of its kind anti encroachment drive which was undertaken by Chandigarh Estate Office officials along with Municipal Corporation Staff, UT Urban Planning Department, UT Electricity Department and the Sector 17 Police Personal is to restore the original design of Sector 17 as designed by French Architect Le Corbusier.

Chandigarh Administration has applied for a heritage tag to UNESCO for various buildings and as part to conserve those buildings, such anti-encroachment drives are being undertaken. A full fledged plan to restore Sector 17 to its original look was made few months earlier and meetings were held for the same with Sector 17 traders to inform them about the specified changes.

What will consitute the new look of Sector 17, Chandigarh 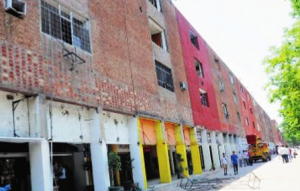 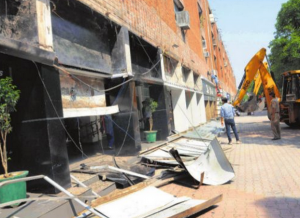 UT Estate Office officials with the help of Chandigarh Municipal Corporation has constituted a team of over 200 people for this special drive. The team includes 50 MC workers, 20 people from Electricity Department, 30 people from Chandigarh Estate office, 30 civil defence volunteers and 150 other strong workers.

A lane of 51 showrooms in Sector 17 E was chosen for the demolition drive so as to make it a pilot project. Over 100 hoardings and boards were removed from 40 different showrooms in the lane. However, remaining 11 showrooms had all aspects according to the given specifications. The drive began as early as 6:00 AM in the morning and continued till 8:00 PM at night.

Traders of Sector 17 have called for a strike and have announced a complete bandh at Sector 17 for Tuesday as they say that no notification was given to them prior to the demolition drive.