Service Charge at Restaurants in Chandigarh

Restaurants based in Chandigarh were charging a service charge of 6% to 12% on the total bill, making city residents pay extra amount of money. According to various eateries and food joints, service charge was claimed to be distributed among staff members i.e. waiters, chefs, etc. According to sources, almost every big and small Chandigarh restaurant had a system in place where they automatically added a certain percentage of bill as service charge over the prices of food items ordered making the grand total to be much more than what was expected.

With these new orders of service charge being declared illegal in Chandigarh, no restaurant based in the city will be able to charge a service charge on their bills. Hence eating out in the city beautiful is expected to be a bit cheaper.

What if a Chandigarh based Restaurant still adds Service Charge? 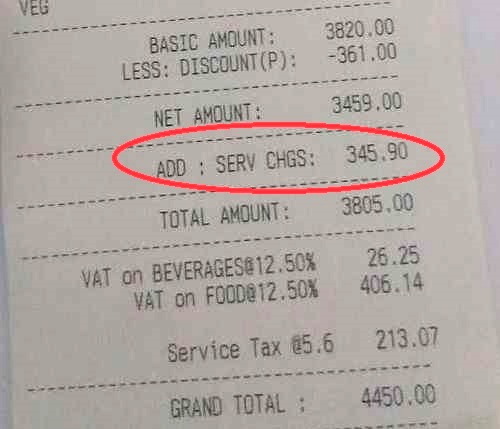 If you ever come across a restaurant that has charged service charge on your bill, you may directly complain about it to the consumer court in Sector 19, Chandigarh. If you think that going to court is a hassle, then simply send a written complaint to the Chandigarh DC office with actual bill copy.

The orders declaring service charge to be illegal in Chandigarh have been passed under section sector 133 of the code of criminal procedure. If a complaint is received for any restaurant, the owner will be booked under section 188 of the IPC.

Charging VAT and Service tax on the total bill is however legal. But do look out for SERVICE CHARGE.