Suzuki Burgman was showcased at the Auto Expo 2018 in a 125cc avatar especially for India. The scooter was one of the few eye catchers on the show and came with matured styling cues. The Burgman is a premium scooter and will be priced well above the Access in Suzuki’s product catalogue. It will take on the likes of Aprilla Sr 125, Vespa 125 and the Honda Grazia which appeal to a customer looking for a more premium offering in the segment. However, if the Suzuki Burgman does well in India, the company might bring bigger Burgman Scooters to India.

One of the more popular scooters in the European markets, the Suzuki Burgman is all set to enter the Indian market. The India specific scooter is the smallest of the entire Burgman line up but borrows styling cues heavily from its elder siblings. There are all LED headlamps on the front accompanied by the turn indicators on the fairing itself. The Suzuki Burgman is a rather large scooter to look at but manages to look very appealing at the same time.

When it comes to the features, there is an all digital instrument cluster behind the handle bar like on a motorcycle which displays all the information one could want. The fuel lid of the Suzuki Burgman is under the seat which opens up quite some space and can easily take up a full size helmet. The storage spaces at front come with a 12 volt charging socket for your phone.

Suzuki Burgman comes with a 124cc engine found on the Access which makes 8.6 BHP of peak power and 10.2Nm of torque. There is a disc brake on the front 12-inch wheel and a drum brake on the rear 10-inch tyre. 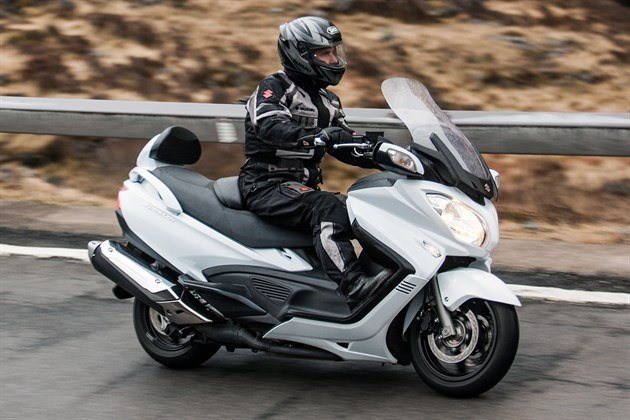 The Suzuki Burgman 125 will come to India sometime later this year and will rival the premium scooters like the Vespa, TVS NTORQ, Aprilla Sr 125 and even the Honda Grazia. We just hope the bigger 400 or 650cc variants launch in our market soon but that does not seem like a possibility as of now. Expect the Suzuki Burgman Price India to be somewhere north of 70,000 Rupees which makes it quite a premium scooter in a market where the margins are wafer thin. But in all honesty the scooter does make a strong argument for a price like that. The recently launched TVS NTORQ and  Aprilla SR 125 in comparison are priced at 58,750 and 63,880 Rupees respectively in India. Vespa remains one of the most premium scooters one can buy right now and sells for 70,000-78,000 Rupees deending upon the variant you chose from.