Chandigarh was ranked as the happiest city in India in a survey conducted by LG Electronics in 2015.

While, Chandigarh continues to remain one of the most preferred cities to live in India, it also faces some challenges. One of those challenges relates to the state of drinking water.

Shortage of Drinking Water in Chandigarh

If you are living in and around Chandigarh then you must already be aware of the water woes.

In peak summer, the residents of tri-city (Chandigarh, Panchkula and Mohali) start facing the problem of inadequate water supply. Because of the improved infrastructure there has been a kind of population explosion in these 3 cities.

The sharp rise in population has resulted in a surge in demand for drinking water causing water shortage.

Against the peak requirement of 116 MGD (Million Gallons Per Day), Chandigarh receives only 87 MGD.  Out of the total 87 MGD, 67 MGD is received from the Kajauli waterworks and 20 MGD through the 207 tubewells.

Chandigarh, with a daily shortage of 29 million gallons of drinking water, continues to face a huge shortage with inconsistent water supplies.

In August 2019, the World Resource Institute (WRI), an international think tank, in its report revealed that Chandigarh tops the list of water-stressed states/UTs in the country.

Is Chandigarh Water Fit to Drink?

One of the prime objectives of the Jal Jeevan Mission of the Govt. of India is to provide access to clean and safe water to all Indians. In view of the same, BIS (Bureau of Indian Standards) conducted a test of the quality of piped drinking water being supplied in the country.

In the first phase, the samples of drinking water were taken from various locations from the national capital, Delhi. The mission was extended to 20 other state capitals in the second phase.

In order to understand the quality of piped water supply, the agency took samples from different locations and these samples were sent for testing to the designated labs.

The report that was made public in November, 2019 has put a big question mark on the quality of water being supplied in Chandigarh.

The BIS tested the samples on 44 out of the 48 parameters for testing tap water quality. 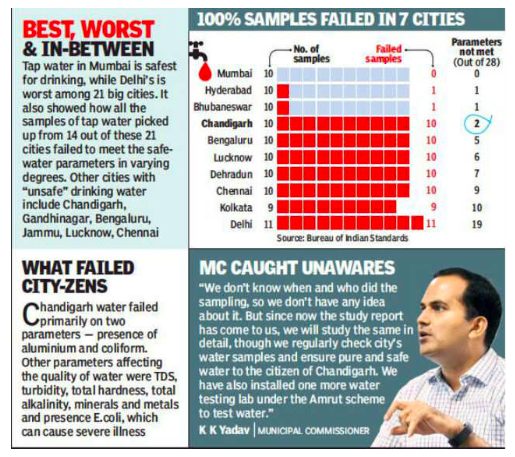 In what can be considered a major shock and a big cause of concern, for the municipal corporation and the common people of Chandigarh, all the 10 water samples collected from different areas of the city failed the tests.

Aluminium, a metal, is widely present in nature. It may be present in water from natural sources or as a result of human activities. It is important to note here that the Aluminium is not an essential element and may cause diseases of the nervous system. Reverse Osmosis water purifiers are one of the most effective ways of removing Aluminium from drinking water.

The corporation authorities claimed that city’s water is safe enough to drink as the water is treated before supplying. The officials also assured that there is absolutely no need to use Reverse Osmosis (RO) water purifiers as the supplied water is constantly tested.

What Do We Feel?