The United States forces have just dropped a massive bomb on Afghanistan targeting the ISIS. This is one of the largest bombs ever made that is available with US forces. The bomb nick-named as MOAB (Mother of All Bombs) weights 21,600 Pounds and is the largest non-nuclear bomb ever made.

In Afghanistan, this bomb was dropped in the Achin district of Nangarhar province which is said to be quite close to the Pakistan Border. US forces dropped this bomb to destroy a series of caves which were supposed to be used by ISIS militants as well as Al-Queda.

The bomb is a smart piece of technology that can cause vast devastation. It was dropped by GPS guided system. As per reports from the Pentagon in USA, the bomb contained 11 tons of explosives and hance is the largest non-nuclear bomb ever made. this bomb in Afghanistan will cause heavy destruction and is supposed to have caused heavy loss to ISIS and Al-Queda militant groups.

However, the destruction caused by this bomb on Afghanistan is yet to be assessed. 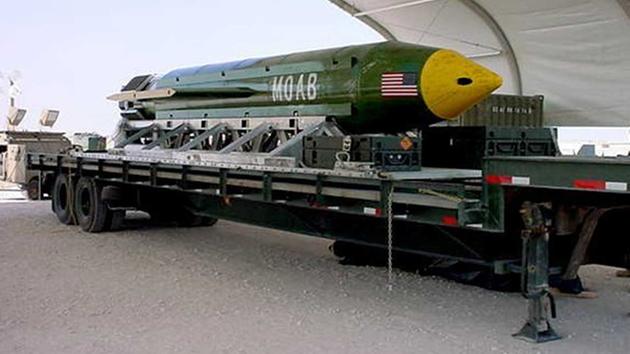 A statement from US said the powerful strike by USA against ISIS used a GBU-43 bomb which was dropped on Afghanistan near Pakistan Border from a US aircraft.

It is believed that these caves and tunnels in Afghanistan near Pakistan border are the same where once most wanted terrorist of the world Osama Bin laden was once traced.