West Bengal Board is all set to officially declare 2017 Class 12 higher secondary result today morning. This was announced by WBCHSE on their official website. The timings to upload 12th result 2017 of West Bengal board have been kept as 10:30 AM. West Bengal Board has organized a press conference at 10:00 AM where the officials will announce WBCHSE 12th result 2017 and it would then be uploaded to the official website wbresults.nic.in and wbchse.nic.in.

If you are a student who appeared for class 12 HS exams in March 2017 under West Bengal Board and are awaiting the result, then your wait finally ends today. In order to check your result, you may follow the procedure given below:

The first step to check your WBCHSE HS result 2017 of 12th class is to log in to the official website of West Bengal board. You may go to wbresults.nic.in or wbchse.nic.in.

Enter your Roll Number / Seat Number and other details as asked.

Click on Get Result. This will show your result card for 12th Board exams with subject details.

You can download the page and even print it for your further reference.

However, it has been observed that due to technical glitches or maybe due to heavy traffic on these official websites, there may be some delays at the server end. In order to give a solution to this problem, West Bengal board has tied up with 8 other websites that would display 12th class board result of West Bengal board 2017 for the students.

These websites include – indiaresults, jagranjosh, exametc. Below is a complete list of websites as well as SMS options from where you can check your West Bengal Board 12th result 2017. 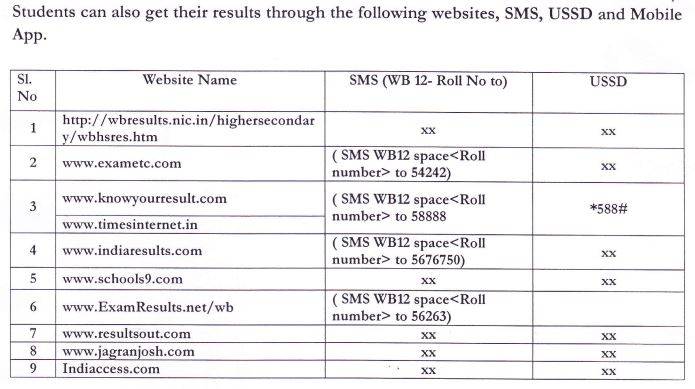 The higher secondary 12th class result declared by West Bengal Board will be for over 8 lakh students who appeared for the exam in March 2017. The 12th board exams started on 15th March and ended on 29th March, 2017.

We wish all students who are eager to check their 12th result 2017 under West Bengal Board – all the very best.