Landslides are a common thing in hill stations. The nearest and the most visited hill station near Chandigarh, Shimla too has landslides. In a recent landslide on Chandigarh-Shimla highway, a car was crushed when a huge rock suddenly fell on the car due to landslide near Jabli (Solan district). After the accident, the victims including a 2-year-old child were rushed to hospital in Parwanoo for the treatment by the police.

All About the Incident

A resident of Una was travelling in his Hyundai i-10 car to Chandigarh with his wife and a 2 year old child on Thursday. On the way, near Jabli in Chandigarh-Shimla highway suddenly a huge rock came down the mountains and hit the car so hard that it got crushed badly. Sushil Kumar, who was driving the car has been suffered by head and leg injury. Whereas his wife and child also suffered minor injuries in the accident. After which they were taken to ESI hospital in Parwanoo. From where Sushil was referred to GMCH 32 in Chandigarh for further treatment. 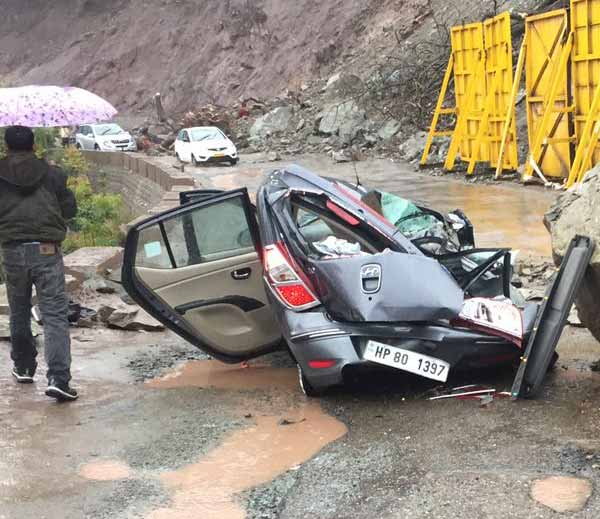 Chandigarh metro request all of you to not drive to Shimla in such a worst weather as because nothing is more important than your life.