The upcoming Hindi Bollywood movie Kedarnath starring Kai Po Che actor, Sushant Singh Rajput and the star kid, Sara Ali Khan has hit the floor for shooting and its motion poster is out. The title of the movie, Kedarnath is also the location of its shooting which is in Uttarakhand and was hard hit by the natural calamity a few years back. The cast, as well as the crew of the movie Kedarnath, are very excited due to its roll out and special it’s a debut film for Sara who is the daughter of the actors, Saif Ali Khan and Amrita Singh.

Shooting of movie Kedarnath kicks off

The actor Sushant Singh Rajput who is playing the lead in the film has posted many images of the shooting locations, Kedarnath and has written his heart out on the social media. This is the first time that Sushant Singh Rajput has been cast in front of the debutante Sara Ali Khan in a Bollywood movies.

The movie poster of Kedarnath that also has a line written ‘Love is a pilgrimage’ on it seems to be a love story between the characters played by Sushant Singh Rajput and Sara Ali Khan. If we talk more about the movie poster, it has mountains, a trident, Lord Shiva and his temple of Kedarnath in the backdrop with an emerging silhouette of a man and a woman, probably of Sushant Singh Rajput and Sara Ali Khan.

Sushant Singh Rajput and Sara Ali Khan will be seen as the lead in the movie Kedarnath and they along with other crew members of the film have taken blessings at the holy shrine of Kedarnath. The actor has posted images of him and others on the social media, visiting the temple and paying obeisance to Lord Shiva at the Kedarnath temple just before the film shooting began. 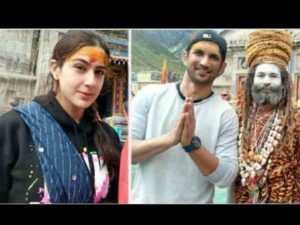 Cast & Story of the movie Kedarnath

Kedarnath is directed by Abhishek Kapoor who has earlier worked with actor Sushant Singh Rajput in Kai Poche while Balaji Telefilms and KriArj Entertainment are collectively producing the movie. The story of the movie Kedarnath is based on the unfortunate tragedy of Kedarnath flash flood occurred in 2013. The actor Sushant Singh Rajput is playing a ‘pitthoo’ – people who carry pilgrims on their backs to the Kedarnath shrine while Sara is playing one of the pilgrims. The official release date of the movie has not been declared as of now but rumors are there that Kedarnath movie will release by the summer of 2018.