Chandigarh is the city of mast malangs and the weddings here are always a fun fair. Its grand and its huge where Chachas and Chachis, Mamas and Mamis, Beejis and Parjaijis, all come to join the conjugal union of the bride and the groom and dance till they break their sandals.

Let’s see how the big fat celebrity weddings happened in Chandigarh that left the Chandigarhians inspried for their D-days.

The ace cricketer of Indian team Yuvraj Singh and Hazel Keech, a British- Mauritian model recently tied knot in the city beautiful, Bollywood style. Their big fat wedding affair was so grand that it started with a traditional mehendi and sangeet function at the 5-star hotel of Chandigarh, The Lalit. It was a star-studded night where the entire Indian cricket team had come along with some great television and Bollywood actors to bless the couple.

The famous Punjabi singer Ranjt Bawa performed on their cocktail event and made Virat Kohli, Ayushman Khurana, Angad Bedi and many more dance to his tune all night. The couple then had anandkaraj at Gurudwara Fatehpur Sahib. Well, the wedding wasn’t over till their conjugal vows were read at the Gurudwara. A Hindu style wedding in Goa was the next big thing they had with again followed by sangeet and reception in Delhi. 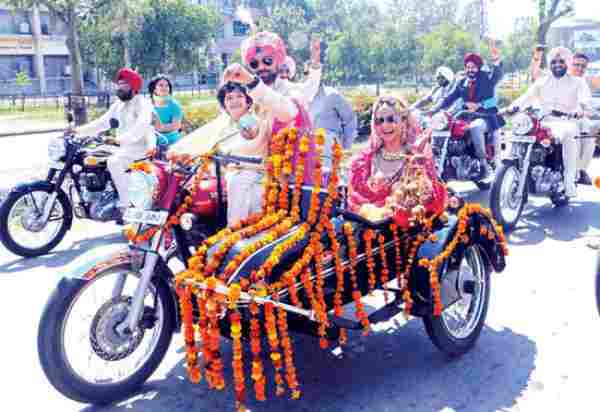 Another crazy wedding was a model- turned- actor, Gul Panag who married her childhood love captain Rishi Attari, a commercial pilot at Hotel Bella Vista, near Chandigarh. It was a much talked about wedding of the tinsel town that had a very unusual vidai. For her love with bikes, Gul planned to come and leave her wedding venue on a bike. This desi bride looked fab in her fuschia lehenga by JJ Valaya and in chunky jewellery of gold and diamond. She even wore a chic aviator on her wedding day years before then the Katrina Kaif brought in the trend of kala chashma for brides to be worn on their weddings.

The crazy pictures of her wedding tell about the fun and frolic everyone had at the function as the bride and the groom clicked together sipping beer from the bottle with their hands crossed each other. The vidai was the star of the show where Attari took away the bride on a motorbike with sidecar. Ah all inspired by Munna bhai! The vidai ceremony was the convoy of bikers on the road where ladies and gents all drove home on the decorated bikes.

Television actors, Sargun Mehta and Ravi Dubey became man and wife in big fat Indian wedding held in Chandigarh. The couple who had met on the sets of 12/24 Karol Bagh, on Zee TV and had participated in Nach Baliye had a very splendid wedding where all rituals and function like haldi, sangeet and mehendi were performed straight from the bollywood style. Ravi who hails from Delhi had come along with other baratis on horse to marry his princess in Chandigarh. 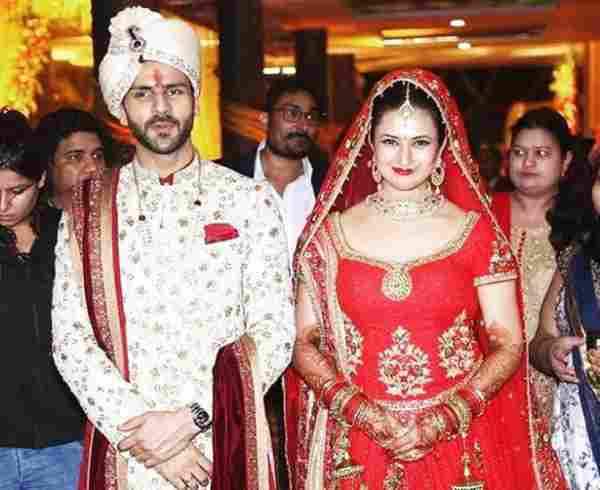 Off lately, the social media was flooded with the images of Yeh Hai Mohabbatein star Divyanka Tripathi and Vivek Dahiya’s grand wedding reception that held in Chandigarh. The event was a high profile affair that took place in a five-star hotel in the city. Though the couple tied their nuptial knot in Bhopal from where Divyanka belongs to but the groom’s family had their own reasons to celebrate haldi, mehndi and sangeet here in Chandigarh post their wedding there.

It was a Bollywood-styled wedding where we saw (pictures on social media) Divyanka in various beautiful designer lehengas and astonishing jewellery while her groom clad in kurta pyjamas and tuxedos. Though the wedding reception of the couple had no celebrities here but they had hosted another reception for their friends from television and Bollywood fraternity in Mumbai thereafter.

The RJ- turned- actor, Aparshakti Khurana, who played a cameo in the Amir Khan starer Dangal got married to his longtime girlfriend Akriti in Chandigarh. Aparshakti who is also brother of actor Ayushman Khurana wore sherwani by Nikhil Shantanu on the wedding day while his bride was in Sabyasachi Mukherjee lehenga. They had lavish and grand functions including haldi, mehendi and sangeet that was no less than a Yash Raj’s Bollywood rendition of marriage where the parents of the groom shook legs on retro number ‘aajkla tere mere pyaar ke charche’, bhaiya Ayushman and bhabhi danced to the tune of ‘Luv Shuv Te Chicken Khurana’ while other cousins and friends grooved on ‘veere di wedding.’

I hope these couples must have inspired you all to have such big fat Indian weddings in Chandigarh. If you are tying the knot this season then get your D-day themed like our celebrities and feel like a celebrity yourself.