People of Chandigarh are all smiles as this beautiful city has been named the happiest city of India in a nation wide survey conducted by LG Electronics and IMRB.

The survey which was conducted across various cities of India was based on a lot of factors. The target age group for the survey was 18 years to 45 years and it consisted of both men and women. Some factors which were taken into consideration to calculate the happiness index of a city included:

Chandigarh topped the list with a happiness index of 190 and no other city was nearby with such a great score. The second happiest city of India, Lucknow stood behind at a score of 157. The top 5 happy cities of India according to their happiness index score are Chandigarh, Lucknow, Delhi, Chennai, and Banglore. If you are looking to travel to India, your trip is going to be quite amazing.

Here’s a complete list of Indian cities with their happiness index score. 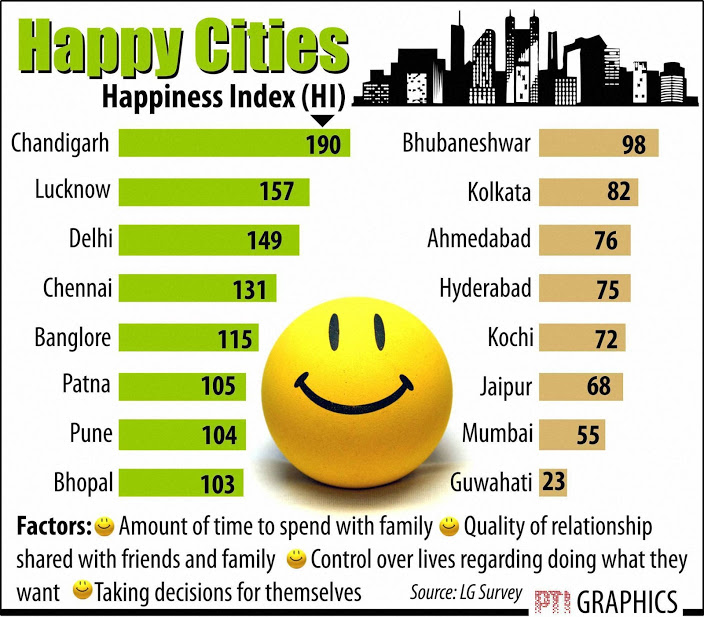 What made Chandigarh the happiest city of India?

Well, there’s no doubt that Chandigarh is a young city and is the most beautiful city of India, but according to the factors listed above, here’s an answer to what made Chandigarh rank as Number 1 in the list of most happy cities of India.

Also Read: Chandigarh gets the cleanest city in India title

Are you bored? Read the latest gossip about your favorite celebs at AmoMama. We know how to satisfy women’s interests 😉