Chandigarh, the city beautiful has the highest number of police density as compared to all other States and Union Territories across India. While roaming in Chandigarh, you will be able to spot a PCR vehicle stationed at all important red lights and chownks on the city roads. Not just this, all police stations in various sectors of the city have adequate police force with inspectors, sub-inspectors, hawaldars and more. And on top of that, the Traffic Police Wing of Chandigarh Police, the men in white dress can be spotted easily on Chandigarh roads. Chandigarh traffic police is known to be the most active police force in the country, which does a large number of challans every year adding to the Chandigarh Government’s revenue. Combining all these, Chandigarh has the largest number of policemen according to its area.

Chandigarh is spread in 114 sq feet area. Although it is expanding at a fast pace towards Zirakpur, Mohali, Kharar, Panchkula etc, but all these areas do not fall under the main city and are not governed by Chandigarh Administration. Chandigarh Police has got 5295.6 policemen per 100 sq. km. which makes Chandigarh rank at Number 1 for the highest police density. 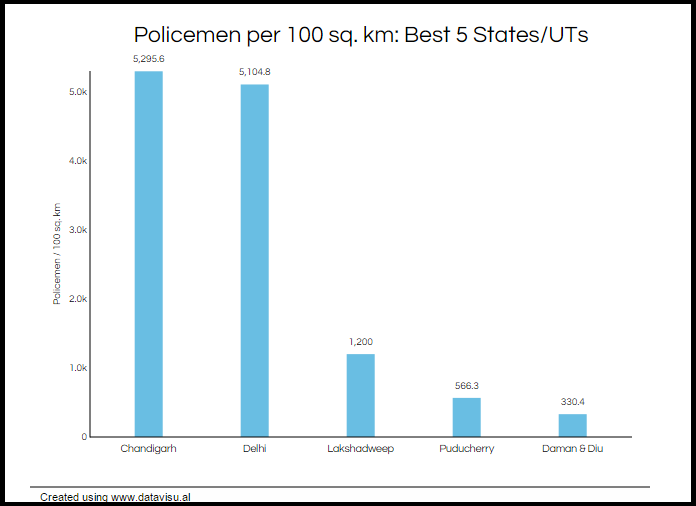 Apart from the highest police density, Chandigarh police personal are known to perform their duties in an organized way. From stopping mobs to cracking theft and robbery cases, Chandigarh police does regular patrolling on city roads to provide safety cover to city residents.

The response time of Chandigarh Police in case of emergencies is also quite good. A PCR vehicle reaches the spot within minutes and the required action is taken in seconds. Despite having the highest police density, Chandigarh Police often keeps on recruiting new policemen in its force to make it more strong.

For more stats on Police force in India, refer: http://www.indiaspend.com/viznomics/india-short-of-half-a-million-policemen-27070