After the huge success of Thailand Exhibition which was held in Chandigarh last year, CII has again organized “Thailand Trade Show 2015” in Chandigarh during the first week of April. The exhibition is backed by Department of International Trade Promotion (DITP) and showcases different items from exhibitors who come from Thailand to sell their products in Chandigarh.

Last year, the Thailand Trade Show had received overwhelming response from Chandigarh residents. A total of 35 stalls were set up in year 2014 and it is assumed that the number of stalls for 2015 will be more as compared to last year. This 5 day exhibition is set to see large number of footfall.

What to expect at Thailand Trade Show 2015: 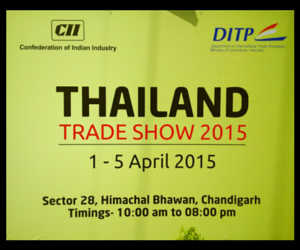 And a lot More!