Chandigarh railway station has got high speed Wi-Fi and anyone can use it absolutely free of cost. It has been a long wait for Chandigarh to get free wi-fi at railway station but now passengers will be able to connect their smartphones and enjoy free internet while on the railway station premises.

Yes, you read that right and this time we are not making an April Fool like we did on 1st April, 2016.

As a part of Digital India Project, Indian Railways joined hands with Google to provide free Wi Fi at 400 Railway Stations all across the country. Modi announced that 100 railway stations would be covered in phase 1 and Chandigarh’s railway station has finally been selected for the project. Wi-Fi has been provided by RailTel in collaboration with Google.

Chandigarh railway station was to get this free Wi Fi service much earlier. But there were some delays in instillation of technological system. Well, we tried and tested free wi-fi at Chandigarh Railway station and it worked seamlessly. The speed is too good and we did not face any problems during the use.

As we have already used the Wi-Fi, let us tell you how to connect to this high-speed Wi-Fi at Chandigarh Railway Station. All you’ll need is a smartphone with charged battery and an activated Sim card. Read On!

How to access Free Wi-fi at Chandigarh Railway Station

We have tried to give you a step by step procedure that we followed. Here you go: 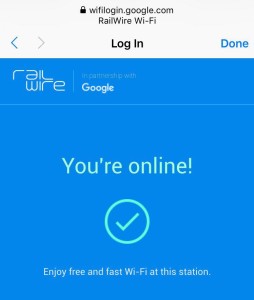 The passengers can have access to free internet for 30 minutes. It is said that the speed of Google free wi-fi that is being provided at Chandigarh railway station is 40 Mbps. Going forward, PNR might be required to log in and use free Wi-Fi.

As we all know that life seems almost impossible without internet in this fast moving world. It is the necessity of modern era. This effort has been taken to keep people connected to the technology even while they are travelling. If you are planning a train journey from Chandigarh railway station, make sure you make the most of this Free high speed Wi-Fi.